Solar panels can still operate under light snowfall, but when snow blocks sunshine completely, for example after a few inches of snowfall, the panels will not be able to generate power. This is due to the fact that solar panel energy works by the cells being wired together, working in harmony, meaning that if just one part of a panel is snowed under, it may shut down the rest of the panel.

Generally, especially when the snow melts quickly, there is no need for further action. Certain panels will aid the snow in melting faster, such as black panels. Snow slides off all solar panels naturally, however, as it begins to melt.

Panels can be angled more steeply to deal with harsh climates, particularly ground-mounted units, which will reflect the winter snow and produce more power.

Snow can be swept off panels fairly easily using a garden rake and Germany has marketed a product which resembles a windscreen wiper to deal with this problem.

Snow on the ground reflects and can actually help to increase your solar panel energy, making it more efficient than it is in summertime. Homeowners living in snowy, cold climates often report a high level of efficiency in their solar power output and this can exceed the 100% predicted on their rated power.

In addition, solar panels allow snow to melt faster because of the reflection caused, particularly if there is only a light dusting of snow. The sun naturally reflects on the solar panel and then onto the ground, giving it a mirror effect.

In heavy snowfall, the solar panels still give off heat, allowing the snow to begin melting above them. Houses with solar panels will avoid roof cave ins because of the dispersion of the snow due to the heat of the panels. 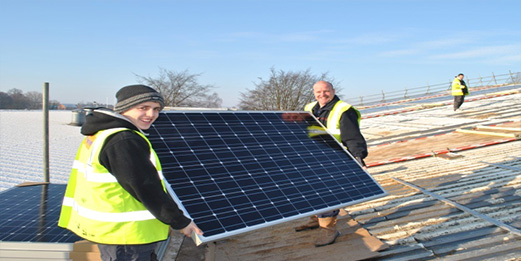 Snow falling off panels simultaneously cleans them and therefore boosts their power output.

On days when snow covers your solar panels, there is no need to worry about your output because your total energy is calculated throughout the entire year, meaning that variations in output during winter months are made up at other parts of the year.

Germany remains the world leader in solar energy, despite its snowy climate during winter months. It actively encourages solar usage and its goal is to use 100% renewable energy by the year 2050.

Thank you for the post! Actually, the question you have answered here in the article was the reason that prevented me from installing solar panels on the roof. We are certainly l worried about the efficiency of solar panels in winter and snow is another factor that can make s worried. As we see, everything is quite easy and clear. To make this important decision, I consulted my Solar Panels Company for information but people always want to hear about experience of other owners and I got it!