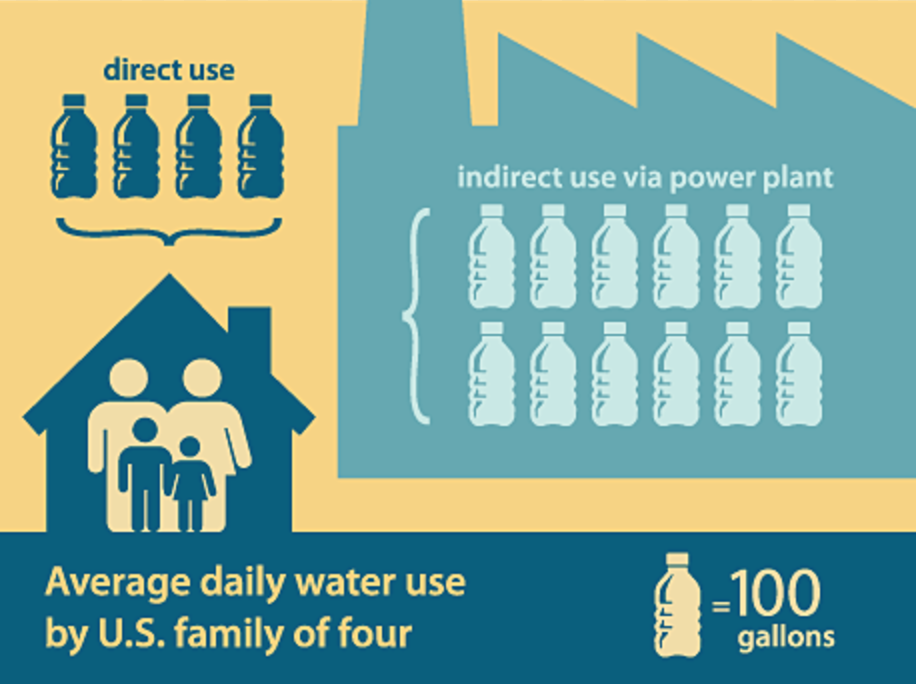 Water uses energy. Energy uses water. The "water-energy nexus"—as it has come to be known—is one of the emerging hot topics when it comes to making homes greener and more resource-efficient. The Home Energy Saver does not currently provide recommendations for reducing water use, but it does help you understand where your water is currently going.

The most tangible link is that when your water is heated, every drop contains a hidden "drop" of energy. Saving hot water translates directly into water-heating energy savings. Such savings are available at hot water taps, showers and tubs, as well as dish- and clothes-washing appliances. Evaporative coolers (aka "swamp coolers"), used in many parts of the country instead of air-conditioning, direclty consume very large amounts of water.

Less obvious, the production of water, followed by its treatment and distribution to your home, and, finally waste treatment all use substantial amounts of energy. Municipal water and wastewater systems consume about 4% of all electricity in the United States. According to the US EPA, this is enough electricity to power more than 5 million homes for an entire year. For an idea of what this means for an individual consumer, letting your faucet run for five minutes uses about as much energy as letting a 60-watt light bulb run for 14 hours.

So, saving water—hot or cold—has additional hidden energy benefits. While you are not billed, directly, for the energy used to provide your water if we all used it more efficiently then water companies' bills would go down and presumably their price to us would follow suit.

It also takes water to make energy. Most of this has to do the water that traditional electric power plants boil to turn their turbines. To run power plants, large volumes of water are removed from rivers or oceans. Some of this is released into the local water body (often at higher temperature, which can have bad ecological consequences), and some is evaporated in enormous cloudlike plumes.

So, saving energy also reduces the amount of water that needs to be diverted through power plants and lost or degraded.