An article in the September/October issue of Home Energy, "Boosting Multifamily Energy Savings Through Lighting Control Settings" (page 38), has implications beyond dramatic savings in stairwells in apartment buildings. Ostensibly the article is about proper settings for motion sensors and the ideal "off-delay time," that is, the time the lights stay on before automatically switching off. The authors recommend that the lights should be set to switch off after only 30 seconds rather than the 30 minutes recommended by ASHRAE (see Figure 1). That's more than a 90% reduction! This isn't really a discovery because the stairwell lights in French apartment buildings have been using a delay-off time of 30 seconds for almost a century.

On the way to this recommendation, however, we learn that high-rise apartment buildings in the United States still lack any motion sensors in stairwells, hallways, and other public places. Many of those buildings are in New York City and cities with high electricity prices, making the potential cost savings especially attractive for landlords. While the energy savings are significant, the security aspects are really intriguing but are hard to value. An intruder can't hide in the shadows because the motion sensor will switch on the lights. If the lights are on, then somebody else is there. Thus, a well-controlled lighting system could even enhance security even though most of the time the area is darker than when someone is present.

Total darkness saves lots of electricity but it probably won't sell. That's why the future of public-area lighting is probably bi-level, that is, where very low illumination levels are maintained until somebody appears and the lights spring up to bright. These systems are now being installed in parking lots and garages. The Japanese have used manually-controlled bi-level lighting in offices and homes for decades but digital controls give this feature new advantages. 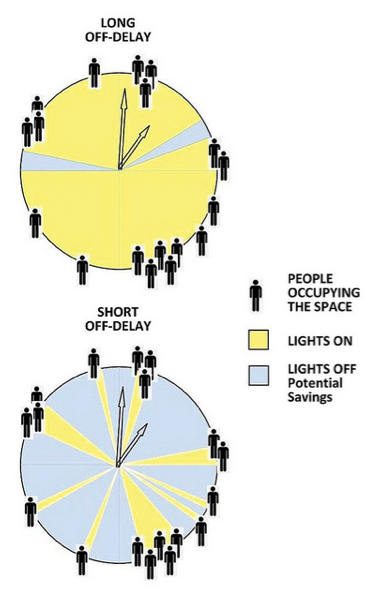 Next we learn that only a few manufacturers of lighting controls offer such short delay-off times. ASHRAE and other standards committees need to clarify that delay-off times of less than thirty minutes are acceptable. Indeed, changes like this will be essential if buildings are to achieve zero net energy targets.

In the future nearly all illumination in public areas will be controlled by a motion sensor, a light sensor, a clock, or be part of a network. The energy savings will be enormous. Will this future happen sooner or later? For it to happen sooner, the designers—and the installers—need to make these kinds of controls a desirable feature rather than an irritant.

I also want to call your attention to a second article in this issue, "How Net Zero Can Save New England Homeowners Thousands of Dollars" (page 30). That title (and conclusion) is based on data from real homes occupied by real people. The cost of building a low energy home and then pairing it with PV continues to fall as builders gain experience with both sides of the energy equation. To be sure, the analysis excludes some intangible costs and benefits—for example, I'd pay extra to live in a net zero home during a power outage—but the life cycle cost has already tipped in favor of the zero energy home.