If your house has a raised floor and no basement, the crawl space is the area between the floor framing and the ground below. This space can be either vented (the most common practice until recently) or unvented (sealed).

Vented crawl spaces generally perform well in most of the western United States, where condensation is rarely a problem in the hot-dry and marine climates. Make sure that the floor is insulated above the crawl space, that the insulation is properly supported, and that there is no space between the insulation and the floor.

Research shows that in the West, homes with vented crawl spaces tend to use less energy than those with sealed crawl spaces, even in the marine climate of the Pacific Northwest. Although vented crawl spaces in western climates may have higher average humidity levels, this is not likely to be a problem if condensation risks are low—that is, if the average ground temperature is above the average seasonal dew point.

Outside the dry and marine climates west of the Rockies, a vented crawl space may work best in an extremely cold climate, such as that of northern Canada or even the cooler parts of western Canada, where warm conditioned air in a sealed crawl space can melt the permafrost beneath the home, causing the home to sink.

In cold climates, insulate all plumbing pipes in vented crawl spaces to keep the water in them from freezing. Heat tape can also help where insulation isn’t sufficient to avoid freezing.

In a flood zone or an area with a high water table, it can be useful to install operable vents in an unvented crawl space to allow for drying after flooding. 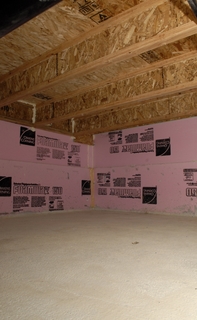 When an unvented crawl space is being sealed, insulation is placed around the perimeter walls of the space rather than in the floor above. This, along with a fan or air blower that provides conditioned air to the crawl space via ducting, couples the house with the cooler temperatures of the ground. This is particularly helpful in hot-summer climates.

Work with a professional trained in building science to make sure your crawl space upgrade addresses potential problems with moisture and air pressure. For a successful conditioned crawl space, make sure your contractor does the following things:

If there is insufficient air exchange with the house above, consider ventilating the crawl space via mechanical exhaust or conditioned-air supply.

If radon is a concern in your area, make sure that the crawl space is properly vented