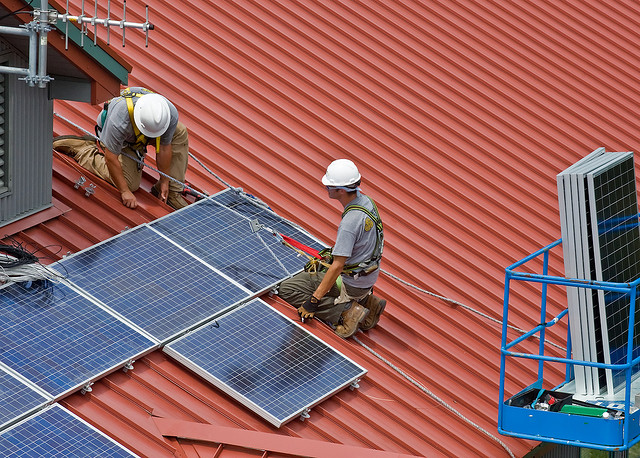 Solar energy isn’t anything new. The technology has been around in one form or another for more than 100 years. However it has never been as practical and financially viable than it is today. Companies and individuals around the world have begun to harness the sun’s rays as a form of sustainable energy at a rate that experts 15 years ago would certainly have scoffed at. But it’s easy to see a fortune 500 company invest millions into a budding industry, these companies make potentially BILLIONS of dollars a year, begging the question, how will utilizing solar energy benefit me personally? Me being the little guy, the guy pulling in five figures and still chipping away at a mortgage. The answer is a lot less complicated than you may think.

It’s easy to see the societal benefits of implementing solar energy on a wide scale. Environmental concern has evolved past conspiracy theories and moved into the arena of scientific fact. Climate change is here and it doesn’t appear to be letting up, more importantly human industry does not seem to be helping matters. Any renewable energy source that doesn’t include drilling into the ground and gleaning precious and limited resources could be the saving grace of a population that for too long has neglected the fact that at some point these resources will dry up, after all sunlight shows no sign of letting up anytime soon. But if solar energy is to be implemented on a widespread societal scale then the benefits have to be immediately tangible to the general population. Luckily, these personal benefits are finally beginning to catch up with the positive impact on society as a whole. Some of the most prudent benefits of solar energy implementation on both a personal and societal scale are as follows:

Price - Solar panel installation has never been as affordable as it is currently. Getting your home installed with the necessary equipment can be as easy as contacting a local contractor, heck even Home Depot has begun installing panels for residential homes. But the true savings come not from the installation itself, but more from the potentially thousands of dollars saved yearly on your home electric bill. Recent studies have shown that electrical costs are on the rise, and show no signs of letting up. Retrofitting your home with solar energy unshackles you from the whim of local electric companies, until the sun starts charging per ray I suppose...

Increased Resale Value -  As solar energy becomes more and more desirable amongst the general population, homes with solar panels already installed have begun to command a higher asking price than homes with traditional electrical wiring. Installing these panels to your property early could potentially lead to a much more attractive profit when it comes time to sell your home, as it can be looked at as a necessary expense down the line as solar energy becomes more widely utilized.

Simple Maintenance -  Despite it’s complicated sounding “high-tech” nature solar panels are deceptively simple to maintain. The panels themselves require little to no maintenance, even dusting the panels is primarily cosmetic as it has little to no effect on the energy output. The panels are also rated to last as long as 25 years, meaning a single family household could potentially be looking at replacing panels once or twice a LIFETIME.

Environmental Impact -  The negative impact that the burning and harvesting of fossil fuels has on the environment as a whole is well documented. Transitioning to a clean and renewable energy source could help slow or even put a stop to the damage to local environments and the atmosphere, the effects of which we have already begun to experience on a global scale.

Job Creation -  Like any developing industry the solar field promises to bring many new jobs to a struggling workforce. Unlike most industries however solar energy has the potential to be implemented on a national or even global level. Panels must be built, infrastructures must be established and outdated systems must be replaced. This means millions of potential jobs being injected into the economy.

Reliance on Foreign/Fossil Fuels - Complete national independence is always preferable to interdependence, but as local resources begin to dry up the government must begin to look elsewhere for fossil fuels, this begins a process where countries are beholden to one another due to dependence on fuel, be it oil, natural gas, or even coal. Solar energy promises to remove this dependence on foreign resources, opening up the political spectrum to less collusion and clearer, more honorable motives.