The mission began when our last child graduated from college and we began to look to downsize our living accommodations. We have lived in the city of Grand Rapids, Michigan, since the late 70s, and as nature lovers were looking for some land with a little elbow room. In 2011, after about a year of searching, we found a five-acre parcel, The Sumac Grove, that suited our needs.

All of the New Urbanists are groaning now, but my office is in the home, and my wife's commute is about the same duration. We did ourselves no favors as far as the LEED site selection criterion are concerned, but the lifestyle was of greater importance to us.

Our goal was to build a LEED Platinum home that included Passive Home standards, and that's just what we did. (In the design phase, our blower door test showed .26 ACH, which is less than half of the Passive House requirements.)

We have been in the house for a little over a year now, and I thought I would give a little update on the performance. 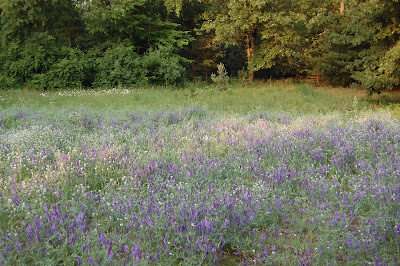 The vegetation on the site has filled in nicely. The wildflowers we have planted are slowly beginning to assert their place in the prairie, and we have a profusion of color with purple, white, and a sprinkling of yellow flowers. It is still early in the season for all of the flowering plants to bloom, but we are expecting a spectacular display.

The fireflies hatched about two weeks late this year. The vast majority of the time they illuminate only when their flight is in an upward path which I call "lighting up" (I swear I never inhaled). Early in the evening they light up close to the ground, but eventually work their way up to the treetops.

We have several sightings of an Indigo Blue Bunting. This morning as I left the house, I flushed four of them from the driveway. We assumed that they had a nest nearby, and this appeared to be several of the juveniles. They are a striking iridescent blue.

The floor plan has worked perfectly for us, doing everything we had hoped for during the design process. We have adapted to the one design element that was somewhat questionable, and that was the placement of the laundry room at the center of the bedroom wing. We struggled during the design process with wanting the convenience of the proximity to the laundry facilities, and the noise that would be generated. We have scheduled most of our laundry during the day, and we seem to have tuned out any noise that encroaches on our sleeping time. 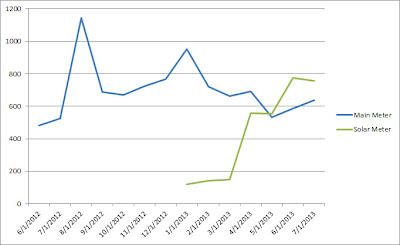 The solar panels were installed last October. We were generating roughly 50–75 kilowatt hours of electricity per month through the winter, far less than our demand of around 750 kWh. The blue line in the graph above shows the power demand from the utility company, and the green line shows what we produce and put back into the grid.

The demand peak in August aligns with the cooling load attributed to the hottest summer on record, and the peak in January aligns with entertaining the family at Christmas time. Other than those two anomalies, we have consistently used about 750 kWh per month. We have had a very cool spring, and have been able to have the windows open for the last two months, helping to keep our loads to a minimum. We have had another addition to the household in the last month that has an impact on our total energy use. My daughter moved back from California and is staying with us while she looks for work. It is good to have her back home.

We did not have the production agreement finalized with Consumers Energy until December last year; hence the late start on the contribution to the grid. You can see the production climbing steadily as we move into the summer months. Winter production was substantially below expected output, and summer production is slightly above expected output. I found historical data for average days of sunshine per month, but nothing current to compare with actual sunshine over the last year. We do still produce some electricity on cloudy days.

You may be interested to know that even the super moon we had the other night was not enough to start up the solar array. I can't remember enough of my college physics to recall if the properties of reflected light are the same as direct sunlight. Proper wavelengths notwithstanding, the added luminance from the close proximity to the moon was not enough to excite the "lunar" array on the roof. We checked a couple of times during the night to no avail. You can cross that off your list for any contributions to energy production.

The only major energy expense we should have right now is our electric hot water. Since this is derived from the heat pump and an electric coil, I have started looking at the cost of installing the solar hot water array. We already have the storage tank and the piping in place, we need only install the rooftop array, and some controls. Hopefully this will reduce our energy requirements to the 550 kWh/month levels we projected in the design process.

Thanks to our decision to install smooth concrete floors as our finish floor, cleaning has been a breeze. We have resisted installing floor coverings, having only two rugs in the house; one in the living area and one in my office to protect the floor. We also have walk-off mats at the entrances. With a dust mop, we can clean the floors in about 5 minutes, vacuum the rugs in about another five minutes, and mop the kitchen and bath in another 10 minutes as needed. This is a vast improvement over the last house which took at least a half a day to clean.

We have not installed the data logging equipment to record how we use energy. While I was looking forward to a more detailed look into how we use energy, we will have to hold off until we can squeeze it into a future budget.

In the meantime, our new home provides us with everything we had hoped for in comfort and quality of life.

(You can read more about the process Sam went through in buidling his sustaiable, net-zero home on his blog, The Sumac Grove.)

-Sam Pobst is the founder of Eco Metrics LLC, a national coalition of green building consultants with expertise in diverse areas of green building specialties, collaborating to develop tools and expertise to advance sustainable building practices. Sam has a degree in Construction Management from Michigan State University, and has 40 years of experience in the commercial construction industry.