Your Home Is a Complex System

It doesn’t pay to improve your home’s energy efficiency without considering other aspects of its performance. In the 1970s, for example, there was a big push to insulate and seal up houses. But reducing airflow without considering the need for controlled ventilation reduced IAQ. These supertight homes sealed in air pollutants and created combustion safety hazards—problems that had not been common when air flowed more freely through houses. Similarly, adding insulation without controlling the flow of moisture into the attic, wall cavities, and living spaces led to condensation, which encouraged mold growth.

The field of building science addresses such problems by focusing on how houses work as whole systems. Always include building science principles in your home energy efficiency planning, or you’re likely to solve one problem while creating three others. Understanding the three fundamental rules of building science can save you lots of money and misery.

Rule 1: Understand Your House as a System

This could be called the “hip-bone’s-connected-to-the-thigh-bone” rule, and it’s one that a lot of people who work on houses don’t grasp. A house is a system with lots of interacting components—framing, electrical, plumbing, heating, cooling, insulation, weather resistance, and so on—each with its associated trade contractor. Unless they are specially trained, trade contractors in these various fields may not recognize how their actions affect other parts of the house. This is another good reason to hire a home energy professional; they are trained to take the house-as-system approach.

How well your house works depends on the proper functioning of

The weather shell consists of the roofing and siding; it keeps the elements out. The building envelope consists of a continuous air barrier and adjacent insulation; its job is to separate conditioned spaces from unconditioned spaces, such as the attic, garage, and crawl space. The air barrier is a layer of materials that block air movement, for example drywall, plywood, house wrap, polyethylene, sealants, and some types of insulation. Many homes lack a good air barrier, and a poor remodeling job can create even more air leaks. Collectively, those holes can be like having a window open year-round.

Mechanical systems—heating, cooling, and ventilation equipment—also have a huge impact on a home’s performance. Improperly designed or installed, they can create big differences in moisture content and air pressure between indoors and outdoors. These can affect the comfort, durability, healthfulness, and efficiency of the house (see Rule 3). For best performance, you want mechanical systems that are properly sized, with distribution systems (ducts or pipes) that are designed and installed for optimal efficiency.

Rule 2: Build for Your Climate

Ever pick up a home improvement magazine or watch a TV show about renovating your home? Remember the sheet of plastic that they attached to the studs before they installed the drywall? That was the vapor barrier; it keeps water vapor from migrating through the wall. Did they tell you which climate regions call for a vapor barrier and where to install it? Probably not. But you can’t build to the same specifications in all climates without creating trouble. It matters a lot whether your climate is wet or dry; hot, cold, or mixed.

Rule 3: Control the Flow of Moisture, Heat, and Air

Moisture, heat, and air all flow naturally from areas of “more” to areas of “less.” Moisture moves from wet to dry areas; heat moves from hot to cold areas; air moves from high-pressure to low-pressure areas. 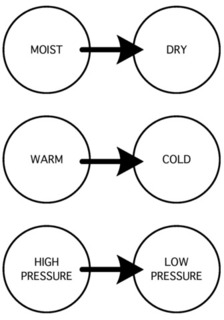 Pondering these three basic flows will help you understand

If you don’t take these flows into account, you could end up wasting money and energy, feeling uncomfortable, and even damaging your home. For a no-regrets remodel, the design and construction of your home’s envelope must slow or stop all three flows; two out of three is usually not good enough.

There’s much more to building science than these three rules. Learning more about air sealing, insulation, attics, basements, ventilation, heating, cooling will deepen your understanding of building science and show you how to incorporate sound practices into your remodeling project.

Your Home Is a Complex System

How Far Will You Go? How Will You Know When You Get There?