The air inside a house is always under pressure and is continually in contact with the walls, floors, ceiling, and everything else inside the house. The air outside likewise exerts pressure on everything it comes into contact with.

One of the requirements for air leakage is that a pressure difference exist between indoors and outdoors. If the air inside a house is pushing harder against the walls than the air outside, we say that the house is under positive pressure, because the house air pressure is greater than the outside air pressure. In this situation, the natural flow of air from areas of higher pressure to areas of lower pressure tells us that air will leak out of the house. The technical term for this is “exfiltration.”

The Causes of Air Leakage

To reduce air leakage in your home, you should know a bit of the science behind it. This will make it easier to understand where to look for air leaks, and how to close them off.

Two conditions must exist in order for air to move between outside and inside. There must be

Your house will have air leakage pathways. You can’t turn your house into an ultra-high-vacuum chamber, but you can reduce the amount of air leakage by minimizing pathways. Think of it as closing some big unseen windows and lots of little ones.

The Driving Forces Behind Air Leakage

When your window is open, wind blowing outdoors will move air through the window. This causes extra pressure inside the house, pushing air out open windows (or other pathways) at the opposite side of the house.

Stack effect is what we usually think of as warm air rising. It’s mainly a cold-weather phenomenon, because big temperature differences are required to induce this effect. How does it work? Air at 70°F, for example, is a lot less dense than air at 30°F, so the warmer, less-dense air rises and the cooler, denser air accumulates lower in the house. This puts the top of the house under positive pressure and the bottom of the house under negative pressure. Holes at the top and bottom of the house then allow the warm air to leak out at the top and cool air to leak in at the bottom. 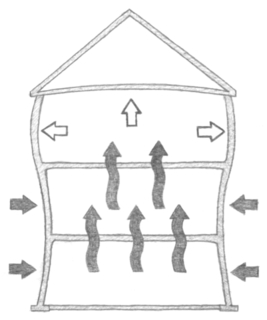 If your ceiling has a hole in it—say, through a recessed-can light, a plumbing chase, or pull-down attic stairs—that warm, buoyant indoor air will rise through the hole and leak into the attic. Have you ever gone up into the attic on a cold day and put your face over the hole where the pull-down attic stairs are? If so, you know that a lot of warm air can leak through holes in your ceiling.

The stack effect depends largely on two factors. These are

The third driving force is created by the fans and appliances in your home. When a fan moves air across the building envelope, it can create a pressure difference between inside and out. The fans in your bathrooms and kitchen are obvious culprits. Less-obvious exhaust fans include the one in your clothes dryer or any fireplace fan that draws combustion air from inside the house.

These devices list exhaust air from the house to the outdoors. In the case of a 200 CFM clothes dryer, 200 cubic feet of conditioned house air is sent outside every minute the dryer is running, while unconditioned air leaks into the house to replace it.

Your forced-air heating-and-cooling system can also create pressure differences, primarily through duct leakage. Let’s say your ducts are in the attic and the crawl space, both of which are unconditioned and outside the building envelope. When your furnace, heat pump, or A/C runs, indoor air is drawn into the return ducts, travels through the heating-and-cooling equipment, and is sent back into the house (with the newly conditioned air) through supply ducts. If your house has many air leakage pathways, the return ducts can draw outside air into the house. Meanwhile, supply ducts can push conditioned air through air pathways in the building envelope, which is called exfiltration.

The duct system may create interior pressure differences as well. How many air- conditioning vents are there in your bedrooms? If each room has only one vent, that’s a supply vent, which sends conditioned air into the room. Now what do you think happens to the air coming out of those vents when the bedroom door is closed? It builds up in the room, creating a positive pressure and looking for a way out. Some of that air will leak back into the house, but some will be pushed outside.

To relieve the pressure imbalance when the bedroom doors are closed, you have a few choices. The most obvious is to put a return vent in each bedroom. Undercutting the bedroom doors is a possibility, but research has shown that a 1-inch undercut isn’t enough. It really needs to be more like 4–6 inches—which you probably don’t want. Another option would be to install transfer grilles or jumper ducts. A transfer grille goes into a wall or door and allows the positive pressure in the bedroom to bleed back into the living areas. A jumper duct does the same thing, but it’s an actual duct connected to grilles in the bedroom and living area (usually the hall outside the bedroom). 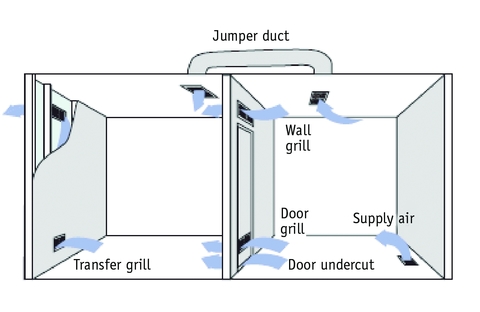 In your effort to minimize air leakage, you can air seal to reduce pathways, but what can you do about the driving forces that create pressure differences?

You can’t do much about wind, other than planting or constructing windbreaks. Likewise, you can’t eliminate the stack effect; pressure differences will continue to exist. What you can do is seal the air leaks so that the pressure difference doesn’t cause an air leakage problem.

With fans, you have some options for reducing pressure differences: