There are many common pathways through which air can leak in or out of your home. Home energy pros are trained to find these holes in your air barrier, but you can look for some of them, too. Here are some tips to help find the weak points:

Window and door openings are major air leakage sites in walls. Whether or not you replace windows and doors, you may have access to the gaps between the window or door frame and the wall framing. Use an air barrier material (not fiberglass or cellulose, both of which allow air passage) to fill those gaps.

Many older windows are themselves leaky. Rebuilding or replacing those windows can further reduce air leakage.

Old homes with diagonal sheathing are very leaky. For the past 60 years or so, builders have used sheet goods—mainly plywood and OSB—for wall sheathing and subfloors. Before that, homes were sheathed with diagonal lumber (see photo to the right), which is a lot leakier, because of all the gaps between boards. If you close up those walls without sealing those gaps, you've missed a valuable opportunity.

Leaks Around Ducts and Other Penetrations 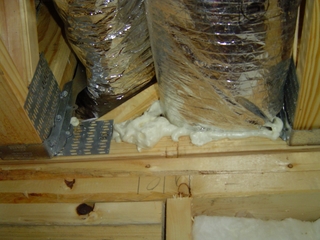 The joists running across that wall, however, were almost completely unsealed. You can see that someone shot a bit of sprayed foam at the bottom of one duct, but the rest is open enough to make a superhighway for whole families of possums or rats, not to mention air. Once ducts go in like that and the house is finished, that room is almost impossible to seal properly. This is a common air leakage problem, and may cause a house to perform poorly in a blower door test.

The solution to this problem is to seal the joist openings with rigid material (plywood, foam board, or other sheathing) before the ducts go in. Then the duct installer can cut a hole in the sheathing, install a metal collar connector, and attach the ducts to each side. That method will provide a good air barrier between unconditioned and conditioned spaces that are connected by floor joists.

Another air-sealing problem related to ducts can appear during remodeling if a home gets a new duct system and old vents are taken out of use. If the ducts go through the building envelope, they need to be completely removed and the holes sealed. The photo on the right shows a duct boot that was left in place, which can allow unconditioned crawl space air into the living space.

Look beyond the ducts, as well, and make sure all penetrations—new and old—get air sealed. The biggest hole may be the large opening cut for the bathtub drainpipes, as shown in the photo below. This hole is often left unsealed and can admit not only air but also critters. 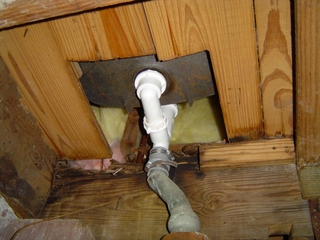 When the ducts in your HVAC system are in unconditioned space, such as an attic or a crawl space, they should be air sealed for two reasons:

The best way to reduce air leakage from ducts is to bring them inside the building envelope wherever possible. Seal leaky ducts with duct mastic, a sticky, paste-like adhesive that can be applied with a brush. Note that the mastic goes on the inner liner of flex duct, not on the outer insulation wrap.

Unsealed Transitions Between Old and New 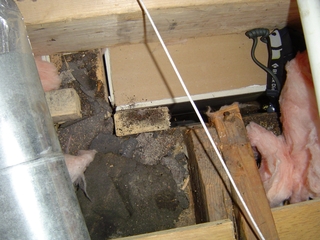 When you add conditioned space, thus moving the building envelope, the old parts of the house don’t always connect seamlessly to the new. The photo on the right shows this problem in a house with a recent addition. Notice the gap between the new ceiling drywall and the old ceiling, as seen from the attic. That opening is more than 1½ inches across (the depth of the 2 x 4 plus a little); it extends laterally for the width of the drywall (4 feet); and it allows unconditioned attic air to go all the way down into the interior wall.

Recessed-can lights usually pose problems. First, they allow air to move across the envelope through the cans themselves if the cans are not rated as airtight. Second, if the penetration isn’t sealed, air leaks can occur around the perimeter of even airtight cans. Third, can lights displace insulation in the building envelope. They should never be used in vaulted ceilings that are part of the building envelope. 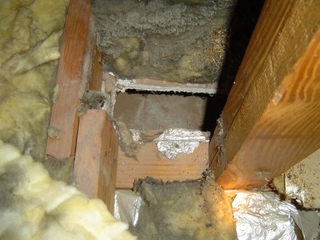 The hole shown in the photo on the right is not visible on first inspection. To reveal that hole, the home energy pro had to move the insulation aside. How do you think the pro knew to move it aside just there, though? Dirty insulation! A lot of air was moving from inside the living area through that big hole and into the attic. Fiberglass doesn’t stop air movement, but it will act as a filter. Hence the dirt you see.

See those crawl space vents in the photo below? You might think there’s nothing out of the ordinary here. It looks like a typical house with a vented crawl space. 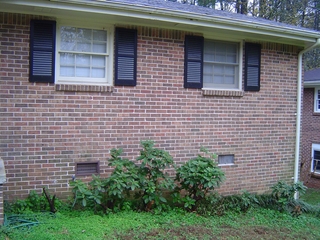 But appearances can be deceiving. There’s actually a finished basement behind that wall, and those vents open into the space above the basement’s dropped ceiling. The homeowners basically had open windows into their basement year-round. By sealing those holes and a few others, they were able to reduce their air leakage by 40%.