What Kind of Electric Lighting Is Best?

There is no one right type of lighting for all applications; each type has its own strengths and weaknesses 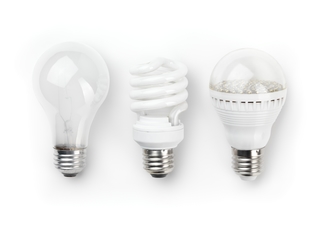 Incandescent light bulbs have been the dominant technology for most residential lighting since they were introduced in the late 1880s. They supply light that resembles sunlight early or late in the day. Ninety percent of the energy used by an incandescent bulb is lost as heat. New incandescent bulbs are markedly more efficient and longer lasting than the older ones, but as efficiency standards rise and competing technologies improve, their predominance is fading.

Halogen lights are a longer lived, more efficient type of incandescent bulb. They emit a very bright, white light and come in many shapes and sizes; some provide an intense beam appropriate for accent lighting.

Fluorescent lights use electricity to produce light more efficiently than incandescent bulbs do. A ballast regulates the current through the light, making fluorescent lights more costly than incandescent bulbs. Four-foot fluorescent tubes have been common in commercial settings, as well as in some residential kitchens and garages. Smaller tubes are often used in kitchens as under-cabinet lighting.

Compact fluorescent lights (CFLs) are a type of fluorescent designed to fit in a standard incandescent bulb socket. They are 3 times more efficient than incandescent bulbs, and generally last 2 to 3 times as long. Ask people about their experiences with CFLs, and you’re likely to hear anything from “I will never buy them again” to “Why would anyone still buy incandescent lightbulbs when you can buy CFLs?”  The “never again” people may be remembering older or low-quality CFLs that flicker, buzz, interfere with the radio or TV, render colors poorly, or fail early.

Fortunately, newer fluorescent products (both tubes and CFLs) solve many of the problems that gave them a bad name in the past. Many provide high-quality, appealing light. Most fluorescent lights today have electronic ballasts, which don’t cause flickering the way the old magnetic ballasts did. You can realize substantial savings from a small investment if you upgrade from incandescent lights to CFLs—and you probably won’t need to change your light bulbs nearly as often.

When a CFL burns out, it’s important to dispose of it safely. Contact your local waste management company or recycling center to learn their preferred procedures.

Light-emitting diodes (LEDs) are a relative newcomer on the lighting scene, and promise to become an even more energy-efficient option.  They are currently much more expensive than incandescents or CFLs lighting, so used them wisely.

LEDs are very efficient at focusing light into a small area, and therefore have been successfully used to replace other types of directional lighting. Unlike fluorescents, they can be turned on and off frequently without shortening their life, which also makes them well suited to use in hallways and in fixtures controlled by motion sensors.

They can also cause problems, largely because they’re installed in a hole cut into the ceiling. Older can lights installed in cathedral ceilings or below an attic may allow air and moisture to pass from the room into the roof structure, increasing heating and cooling bills and encouraging mold growth. Finally, insulating around the can may create a fire hazard.

If you want can lights, buy new, insulated, airtight models that have been pressure tested for low air leakage and rated for insulation contact. Use reflector-type bulbs; most of the light from a regular bulb will get trapped inside the can, making the fixture extremely inefficient.  If you use CFL or LED reflector bulbs, make sure they’re designed for enclosed fixtures or they may become very hot, making them run inefficiently and shortening their life.

Consider using surface-mounted fixtures instead of can lights—perhaps track lighting or wall sconces.

In the last several years, the amount of mercury in a fluorescent light has been reduced to about one-tenth of what it was in the past. Today, breaking a new CFL indoors does not create a major hazard.  If you remove the broken CFL and ventilate the area for an hour, your mercury exposure will be about the same as from eating a bite of tuna fish. See http://www.epa.gov/cfl/cflcleanup.html.

What Kind of Electric Lighting Is Best?