The Need for Ventilation

When you tighten your house to conserve energy, natural ventilation is likely to be too low to exhaust moisture and dissipate indoor pollutants. Leaving ventilation to chance and thinking, “We’ll just open the windows,” is a thing of the past. This is where controlled ventilation comes in.

Effective ventilation exchanges fresh outdoor air for stale, particle- and chemical-laden indoor air. Air exchange occurs consistently, every day, throughout the year, and pollutants are exhausted from the kitchen or bathroom where they are produced.

Standards for good ventilation are set by the American Society of Heating, Refrigerating, and Air Conditioning Engineers (ASHRAE). All ventilation recommendations in this book meet or exceed ASHRAE Standard 62.2.

There are two main types of home ventilation:

Both are important for a healthy, durable home.

Cooking and showering introduce a lot of moisture into the home. Spot exhaust ventilation quickly removes moisture (as well as odors and pollutants) at the source, such as over the stove or in the bathroom. In order to truly remove the moisture, all ventilation ducts must terminate outdoors—never in the attic, basement, or garage.

If possible, install the exhaust fan directly above the source of whatever you want to get rid of. These fans should be turned on whenever you cook or whenever the bathroom is occupied, and they should stay on until the room is free of moisture and odors. Because warm air rises, place exhaust fans above the stove or shower; a fan placed off to the side works much harder to pull air across the room, wasting your electricity dollars.

A new generation of fans has become available in the past few years. These fans are ultraquiet, and supercheap to operate (under $30 a year in most areas), and they exhaust air more effectively than the old fans did. They also have controls that do the work for your family. Ever tried to get some people to turn the exhaust fan on and off? These new controls automatically turn the fan on when the humidity in the bathroom goes up during a shower, and then turn the fan off when the room is dry. Other controls have occupancy sensors, turning on or off when anyone enters or leaves the room. It’s much easier to use these fans than to change your family’s old habits.

For quiet operation, install either a fan with a low sone rating or a remote-mounted fan. With the latter, the grille is located above the pollution source, and is ducted to a fan in an attic or other remote location that vents to the outdoors—never into the attic. Make sure the remote-mounted fan is well secured so it doesn’t vibrate.

What Size Exhaust Fan Do You Need? ASHRAE Standard 62.2 is the national standard for sizing exhaust fans. ASHRAE recommends that the bathroom exhaust fan be able to move at least 50 CFM if it is user controlled, 20 CFM if it operates continuously. Most new bathroom fans can do this.

For the kitchen exhaust hood fan, ASHRAE recommends 100 CFM for intermittent use. For continuous use, have an HVAC professional size the exhaust fan based on your kitchen’s size. Avoid getting a fan that’s too powerful; it can cause negative pressures and backdrafting. If your exhaust fan exceeds 400 CFM, the new building codes require that you provide makeup air, via a hard-wired fan, to prevent this from happening.

It’s important to have an exhaust fan above a gas range in order to avoid indoor air pollution from combustion products. Be sure to follow the range manufacturer’s recommendations for fan size. 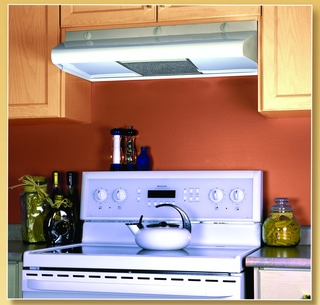 People with a kitchen range in an island sometimes don’t want a range hood in the center of the kitchen, so they use a range-level fan. But since a range-level fan must pull hot air both across and down, it must be very powerful. Some of these fans can depressurize the house enough to backdraft combustion appliances—and they don’t do well at removing odors and pollutants.

Don’t get a recirculating fan (sometimes called a ductless range hood). All they do is take the greasy, smoky air, concentrate it, and blow it back into the room—a poor way to improve air quality. These fans are supposed to filter the air before returning it, but they don’t remove heat or moisture, and they remove less cooking grease and odors than ducted fans. They are much cheaper to install than ducted fans, but at the expense of performance.

Any time you replace a combustion appliance, seal ducts, do air sealing, or in any way change how your house system works, contact a local energy rater—preferably one with BPI (Building Performance Institute) or RESNET (Residential Energy Services Network) certification—to test and make sure that all combustion appliances inside the home work properly.

Ventilating your whole house is especially important if your remodeling job will tighten up the house, as most such jobs do, or if you already have poor IAQ. In humid climates, consult your air-conditioning professional; it is often a good idea to mechanically control humidity along with temperature and ventilation.

There are three types of central ventilation system. You could install a system that

A central exhaust system pulls air out of the house. It differs from a whole-house fan in that it is not intended to cool the house, but only to cause enough air exchange to maintain good IAQ. It may consist of a single fan centrally located in a hallway or at the top of the stairs.

The simplest kind of central exhaust system is an upgraded bathroom fan that has a motor built to run for long periods of time and that is sized to ventilate the whole house. You can simply replace your old, noisy bathroom fan with one of the new ones (making sure it’s appropriately sized), then remember to turn it on and let it run when needed—or install a continuously operating model. In the latter case, use a two-speed fan that can be operated continuously at low speed to provide general ventilation and switched to high speed when the room is being used. (Other bathrooms still need their own spot exhaust fans.)

The new generation of bathroom fans we’ve been discussing almost always have permanent-magnet motors that are rated for continuous duty. They are inexpensive to run; they are rated at under 1.0 sone; and they last between 12 and 20 years in continuous duty—unlike many bathroom fans, which have a short life and make lots of noise.

Another central exhaust strategy is to install a remote multipoint exhaust fan. Usually located in the attic, a remote fan is ducted to several exhaust grilles that take air from locations throughout the house, including each bathroom. This system replaces several noisy, inefficient bath fans.

Exhaust ventilation was once recommended only for homes in cold climates, but in tightly built homes with low airflow, it can be used in any climate. In humid climates you may need to add a small dehumidifier or opt for a variable-speed blower with a humidistat control on your A/C to help control indoor humidity. In cold or dry climates, the very slight negative pressure (about 3 pascals or less) in the house helps keep warm, humid indoor air from pushing into the walls, where it might lead to condensation and moisture problems. To allow air circulation, interior doors should be undercut or jumper ducts should be installed between rooms.

A central supply system pulls outside air into the house. It is a good option for tight homes in hot and humid climates; proper installation usually requires a trained contractor. The system slightly pressurizes the house, pushing indoor air out through small openings in the building. This is called positive pressure, and it helps prevent outside moisture and pollutants from getting in through these openings.

Adding a central supply system is not recommended in cold climates, where you don’t want to force warm, moist air into cold walls or ceilings. This can quickly lead to condensation, mold, and rot. 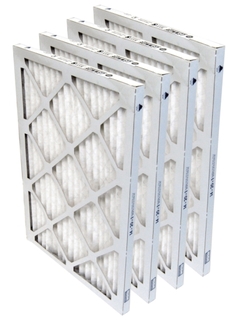 With a central supply system, you should install an air filter on the supply fan to clean the air coming into your house. Even if the air around your house isn’t highly polluted, it is likely to contain particulates that should be filtered out.

When contractors add supply ventilation to an existing house, they often run a duct from outside and connect it to the return duct of an existing forced-air heating-and-cooling system. This brings in outdoor air and distributes it around the house through the heating and air-conditioning ducts.

This method is appropriate only if your furnace fan or blower is a newer unit with a motor known as a permanent-magnet, electronically commutated motor (ECM), integrated control motor (ICM), or variable-speed motor (all names for the same kind of motor). These are far more energy efficient than the blower motors of a few years ago and allow the airflow to be set to much lower levels when outdoor humidity is high and you want to run the fan for ventilation only.

If your air handler or furnace fan is one of the old-fashioned models, using it to ventilate can significantly increase energy use because it moves much more air than is needed. This can also cause uncomfortable drafts.

An ECM fan will operate efficiently at lower than typical furnace speeds. This allows a reduced airflow for ventilation when heating or cooling is not needed. These new fans use far less electricity than the old ones, and fan speed can be varied, which can be a big help in controlling indoor humidity. If you are replacing your furnace or A/C as part of your project, you should consider buying a unit with such a fan. However, retrofitting your existing furnace air handler with an ECM is expensive (about $1,000). If you are not replacing the unit as part of the project, it’s better to get a fan specifically dedicated to ventilation, keeping it separate from the heating-and-cooling system.

A balanced central system uses two fans. One fan exhausts stale air out of the house; the other fan brings the same amount of outside air into the house. This system creates a neutral, or balanced, pressure, and and is particularly appropriate if you want to use a heat recovery system.

There are two ways to go, depending on your climate:

Heat/energy recovery is most likely to be cost-effective in severe climates. For maximum satisfaction, be sure to have a skilled pro install and maintain your HRV or ERV.

There are inexpensive balanced systems that use two wall-mounted fans of equal capacity—one for supply and one for exhaust—in two different rooms. However, this may cause poor distribution and uncomfortable drafts, because the single supply dumps all the fresh air in one spot, and the single exhaust takes all the stale air from a different spot.

The best method is to supply air to the common living areas, such as living rooms and bedrooms, and to exhaust air from the rooms where pollution is high, such as the kitchen and bathroom. This can be done with ducts and remote fans. (Keep the kitchen range hood separate.)

To minimize drafts from supply fans, a diffuser can be used to mix the air. A diffuser is a grille that has a smaller open area than the duct attached to it. The reduced airflow forces air moving through the grille to speed up and move farther into the room, where it can better mix with indoor air. Placed high on a wall, a diffuser allows air to mix before it reaches anyone. This makes the room more comfortable, especially in harsh climates where entering air may be unpleasantly hot or cold.

The Need for Ventilation